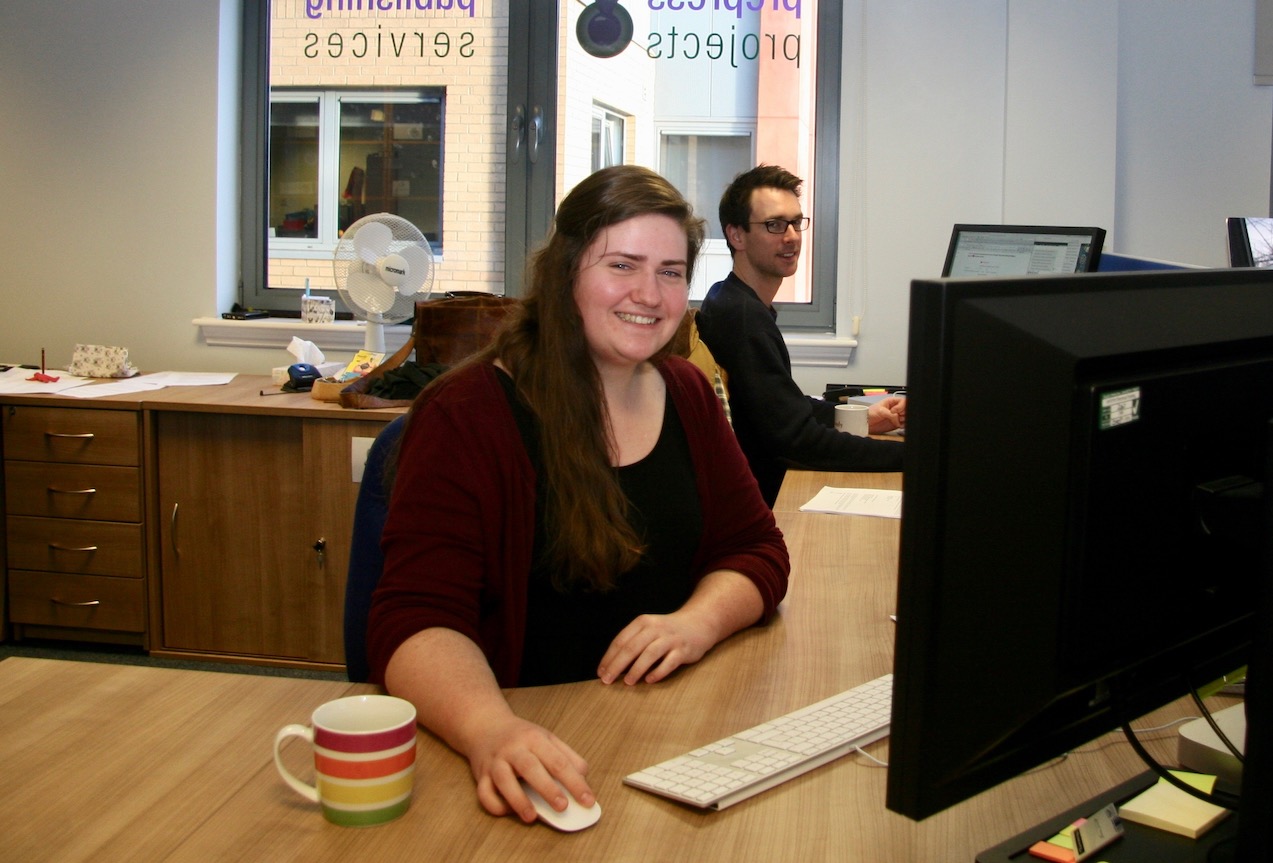 After having decided that I’d spent enough time at university, it was time to start looking for a job. As I have a background in English language and literature (I have a BA in English Language and Culture and a MLitt in Victorian Literature) I thought that publishing could be the right sector for me. Even though I had not given academic and scientific publishing much thought before starting to research Prepress Projects when I was thinking of applying to the summer internship, it actually makes a lot of sense to go into academic publishing and I think it suits me very well. For instance, at university I would read through friends’ essays and comment on what I thought could be improved. I also always rather enjoyed creating the reference list and making sure that all the commas were in the right place and that the right words were capitalised and/or italicised. That is only a very small proportion of what we do here, but that kind of attention to detail is very important in everything we do.

I first saw the summer internship advertised on the Publishing Scotland website – probably some two or three months before the deadline. I had already decided that I would apply and I then happened to meet some of the Prepress Projects team at a one-day training course on proofreading. I filled out the online application form and, very soon after the deadline had ended, I received an email inviting me to come to Perth for an interview. The email also outlined what the rest of the interview process would look like and who I would meet on the day.

The interview consisted of two parts. During the first part I was asked several questions about my time at university and overall qualities and experience, and also – perhaps more importantly – why I was interested in working at Prepress Projects. The second part of the interview comprised a general knowledge test (science, literature and news) and a short proofreading test. At the end of the interview I was told I could expect to hear from them in about a week’s time or so. My interview was on a Friday, and on the following Tuesday morning I received a phone call saying that they were offering me one of the two intern positions.

Kirsty (she was the other summer intern) and I were given the chance to meet everyone a couple of weeks before actually starting the internship. Then, when I actually started, I spent the morning reading through the company policies and afterwards I was quickly set to work.

There seem to be quite a few internships out there that don’t involve the intern doing any actual work that contributes to the team; this internship is very different from that. My first tasks included creating a book information file and a megafile (a file that contains all the different chapters of a book, including the general introduction, abstracts and author information). Throughout the internship I was given a great variety of tasks to do, including styling of documents, checking and editing references, emailing authors, collating author corrections onto a master proof, checking revises and managing duplicate users for an online journal.

I wasn’t expected to know how to do any of these though; someone always explained exactly what to do before starting a new task or starting to work for a new client. I was also encouraged to keep asking questions whenever I wasn’t sure how to do something and everyone was always very happy to answer them. I felt like I was part of the team right from the start, and this was intensified by, for instance, the coffee and cake breaks we take when it’s someone’s birthday and the bake sale for charity that we all contributed to (by baking, buying or both!).

At the beginning of the internship I was told that they could not guarantee that I would be offered a job at the end of it. However, luckily, I was offered a job as project editor. I still do many of the things that I was doing as an intern, though many new tasks and responsibilities have been added to that list. For instance, I now spend quite a lot of my time copy-editing and proofreading. All in all, the internship was an invaluable opportunity to gain experience in academic publishing and to become part of the team at Prepress Projects.

Follow our Twitter feed for the latest updates on our response to the Coronavirus pandemic and any impacts on our service.